"Prove it. Just look."
She almost gives in, but she knows.
Hiding in that darkened mirror, the beast patiently waits for her to meet his shadowed gaze.
*


My beast lives in the mirror.

I prefer not to voice my worst fears, I'm just superstitious enough not to say the words out loud, but I'll admit to one of my biggest fears, which is also my most irrational one. You see, I'm not scared of the dark, I sleep best when the room is pitch black, but I'm freakin' scared to look into a mirror if the room is not well-lit. And I know it's the stupidest thing in the world and I know there is nothing in there, but the tiniest part of me will not tempt fate and look into a mirror if it's dark-ish. Because, well, what if?

I'm pretty sure this is the first time I've entered a challenge on the first day it's been available! This gives you lots of time to check out the rest of the entrants and maybe take a shot at the challenge yourself!

Redscale: An Experiment in Film Photography

I rarely shoot with my 35mm SLR anymore because the cost of developing is crazy*. Every couple of years, though, I can't resist the urge to take a roll or two of shots before going back to digital.  This past summer was one of those times, but I was pretty busy and never got the chance to pull out my camera, so instead I haunted Lomography, a website dedicated to film photography and daydreamed about my own dusty camera.  Last week we ended up taking a trip to the coast, and just a day or two before leaving I found a tutorial for making your own "redscale' film on their website, and decided I'd try it out.

Here's the Point Cabrillo Lighthouse taken with my digital camera: 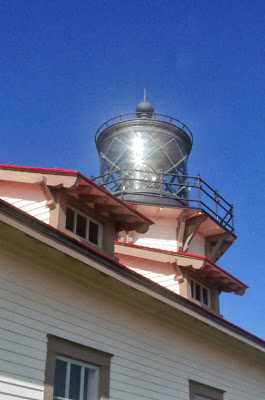 And here's the same shot with my 35mm using the redscale technique: 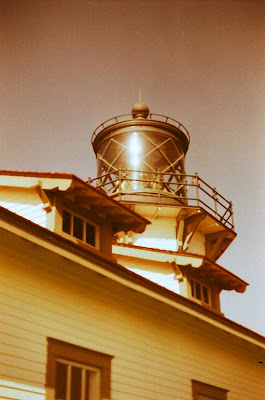 Pretty cool, right? Unfortunately, things weren't as easy for me as they were for the guy who wrote the tutorial.  First, I'm not overly competent or patient with pliers. Second, my camera didn't seem to care for my loading the film in upside-down. Neither of which were major deterrents. The third little glitch, though, almost ruined my whole experiment: the film I used ended up tearing out of the canister after my last shot, so I couldn't wind the film back up. I had to take the whole camera into Costco and have them remove the film in their darkroom bag! Luckily, they had no problem doing so and I ended up with a full roll of pictures including a few interesting images.

I'll post a few more redscale pictures along with a few of the digital pictures later on. I have ~1000 digital images to sort through from our trip, plus another roll of 35mm that I used normally, so it might be a week or two before I post them.

Enjoy the rest of your weekend!

*I almost forgot! The drugstores around here charge $13-$15 for developing, a set of prints & a disc; I just found out that Costco charges $8 for the same three services! If you don't get the discs it's only $3.99, or $5.99 if you want duplicates! I won't be able to blame my lack of 35mm photographs on the cost of developing anymore...
Posted by Rachael at 12:19 AM No comments:

Rachael
I hate introductions. I always feel like I'm writing a personals ad. The best part of my life is my family. I tend to write in run-ons and I overuse "..."